In a video that has been viewed over 28 million times, Ibn Ali Miller, an American Muslim has been deemed a role model and peacemaker

Ibn Ali Miller, 26, an American Muslim from Atlantic City, has been deemed a role model and peacemaker since the release of a video showing him putting an end to a fight between two young men.

Filmed by a group of teenage bystanders, the video has been viewed over 28 million times on YouTube. The video shows two high school students fighting in the middle of a street in Atlantic City, New Jersey (United States), when a man came to put an end to the fight. The Washington Post and Time Magazine featured articles on this man, who turned out to be American Muslim Ibn Ali Miller.

Miller, was leaving from his mother's house when he saw the group of teenagers gathered in the neighborhood. In the video, we see Ibn Ali Miller lecturing the two young men, calling them to think about their actions.

“You’re almost men, you’re not kids no more,” Miller tells them. “Start acting like it. You’re going to get nowhere like this.”

He condemned their friends for laughing and encouraging them. He pointed to another teen and said: “I know where you’re from, humble beginnings. Your mom and dad worked hard to get where they’re at.” He turns to another. “Your dad’s doing life, you think it’s a game out here? It’s no game out here. It’s real out here, little bro.”

Then Miller tells the two young men who were fighting that he won’t leave until they shake hands. After some persuasion from Miller, they finally end up doing what he suggested.

We need more people like him to step up! WOW! 💪🏾✊🏾✊🏾✊🏾 pic.twitter.com/SmYzuVJnqj 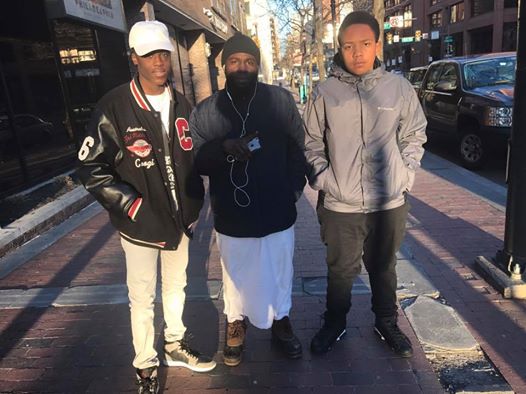 Rewarded for his act of bravery, Ibn Ali Miller delivered a message. In the video below, posted on YouTube, the young American Muslim thanked God, and then was overwhelmed with emotion by talking about his mother: “I’m crying because this whole situation deeply saddens me. The fact that it’s unbelievable — this should be very believable, this should be a norm, this should be regular.”

“I’m a Muslim. I was raised by Muslim parents. That’s what we were taught in my house, always, growing up,” he said.
1
Prev Post Next Post
1 Comments

This brother is a hero! May Allah reward him!